The Leper In The Bible 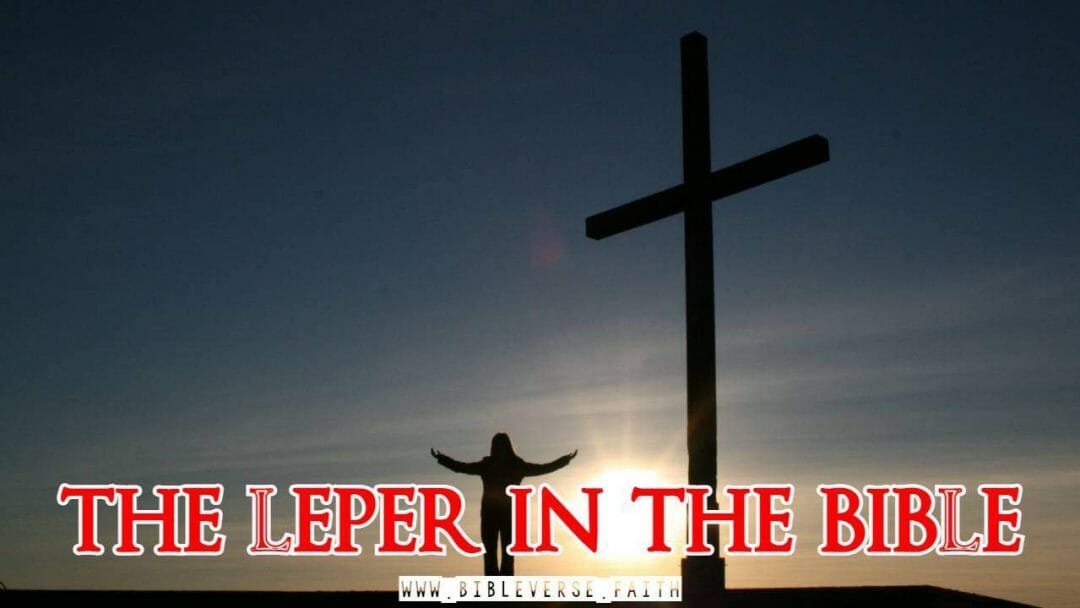 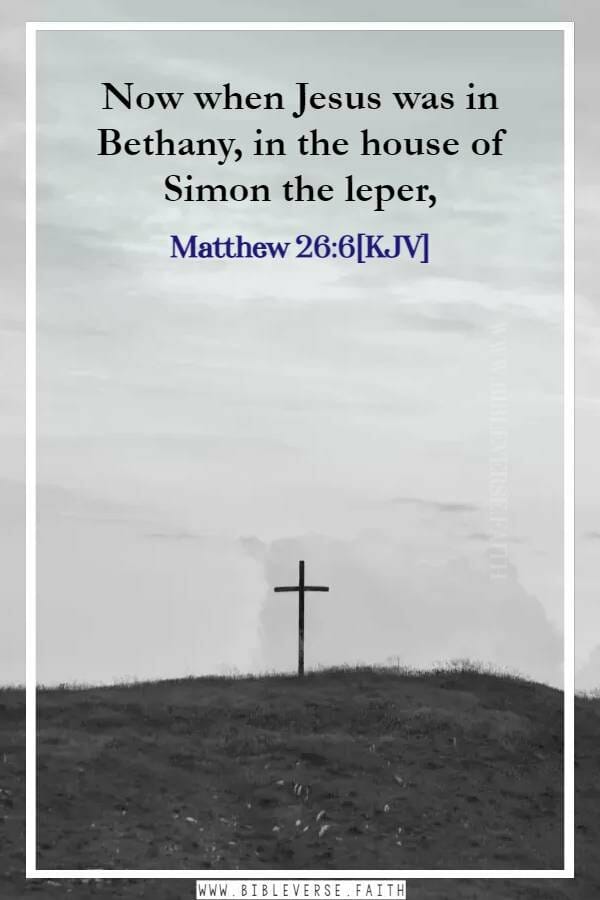 “Now when Jesus was in Bethany, in the house of Simon the leper,” 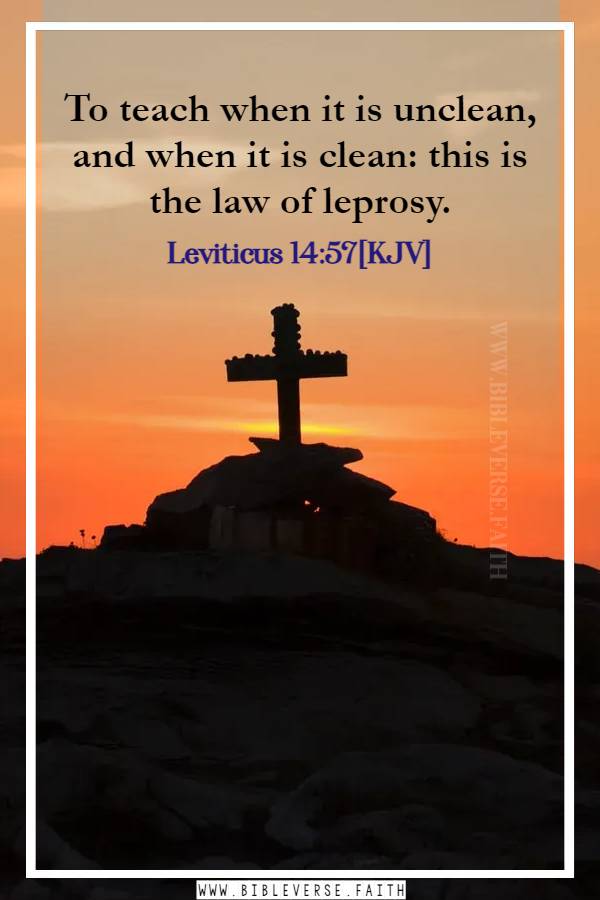 “To teach when it is unclean, and when it is clean: this is the law of leprosy.” “When the plague of leprosy is in a man, then he shall be brought unto the priest;” 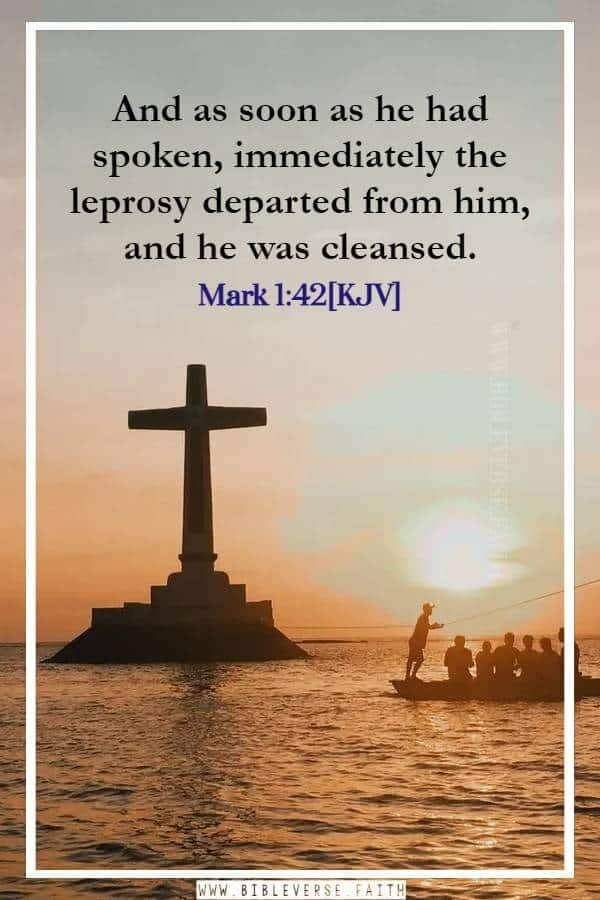 “And as soon as he had spoken, immediately the leprosy departed from him, and he was cleansed.” 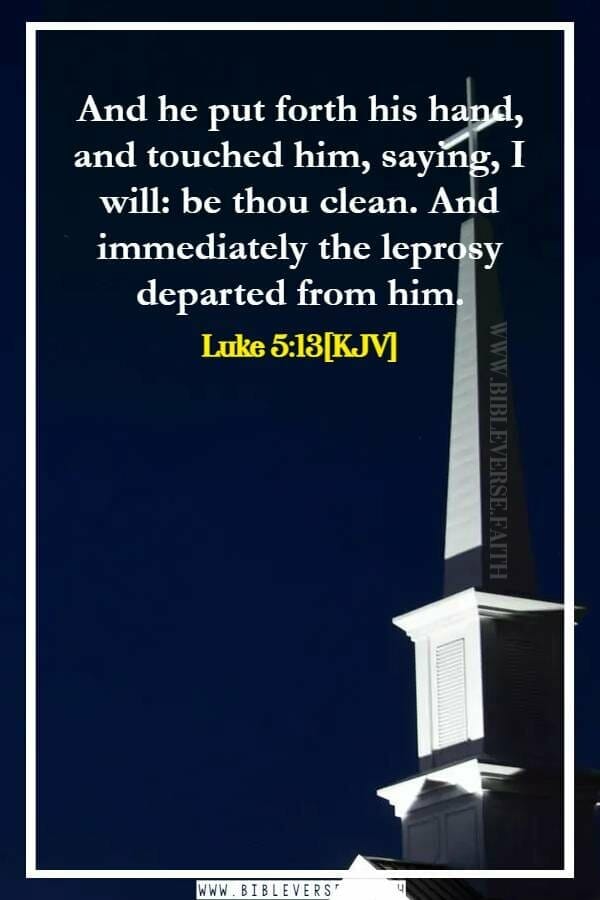 “And he put forth his hand, and touched him, saying, I will: be thou clean. And immediately the leprosy departed from him.” 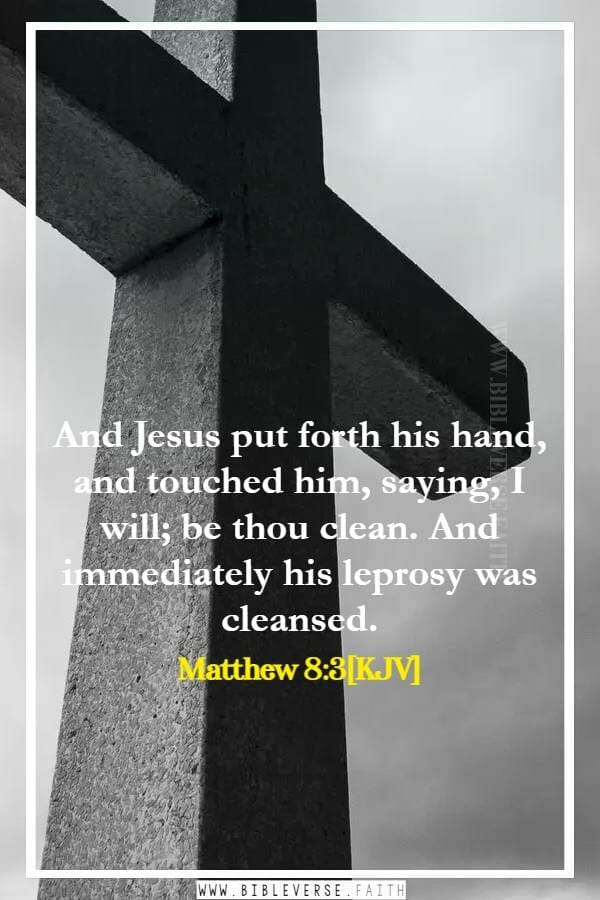 “And Jesus put forth his hand, and touched him, saying, I will; be thou clean. And immediately his leprosy was cleansed.” 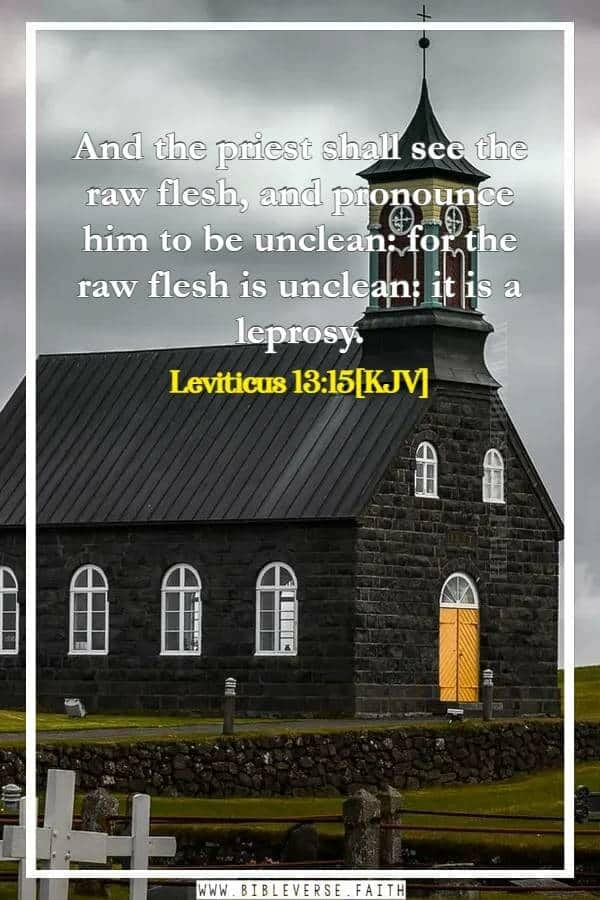 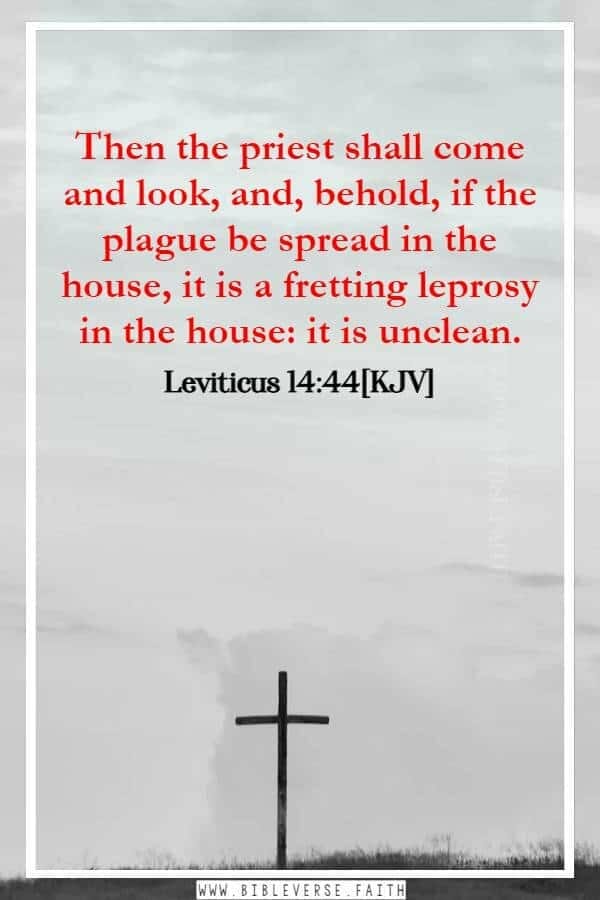 “Then the priest shall come and look, and, behold, if the plague be spread in the house, it is a fretting leprosy in the house: it is unclean.” “And, behold, there came a leper and worshipped him, saying, Lord, if thou wilt, thou canst make me clean.” 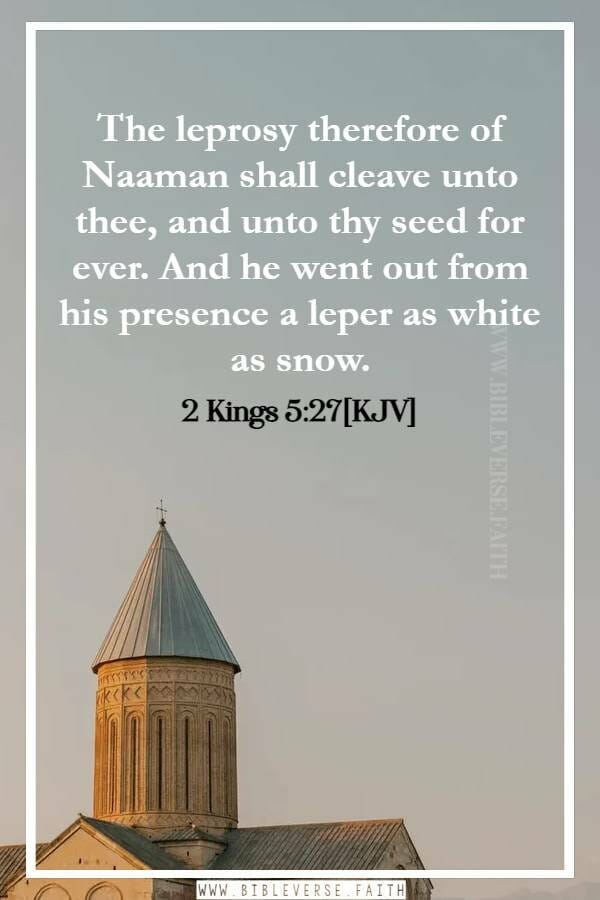 “The leprosy therefore of Naaman shall cleave unto thee, and unto thy seed for ever. And he went out from his presence a leper as white as snow.” “Command the children of Israel, that they put out of the camp every leper, and every one that hath an issue, and whosoever is defiled by the dead:” 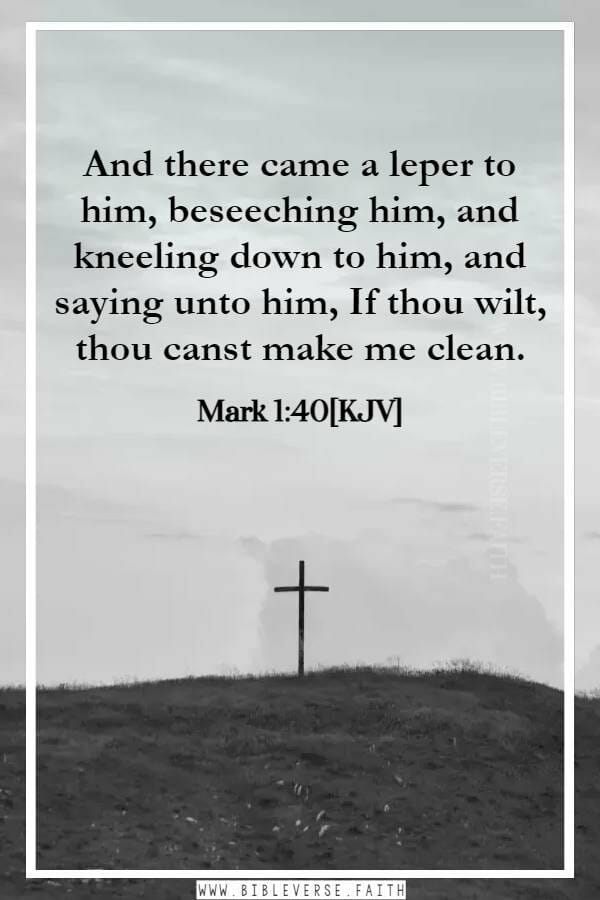 “And there came a leper to him, beseeching him, and kneeling down to him, and saying unto him, If thou wilt, thou canst make me clean.”

Leviticus 14:54 KJV
This is the law for all manner of plague of leprosy, and scall,

Leviticus 13:47 KJV
The garment also that the plague of leprosy is in, whether it be a woollen garment, or a linen garment;

Leviticus 14:32 KJV
This is the law of him in whom is the plague of leprosy, whose hand is not able to get that which pertaineth to his cleansing.

2 Kings 5:3 KJV
And she said unto her mistress, Would God my lord were with the prophet that is in Samaria! for he would recover him of his leprosy.

Leviticus 13:8 KJV
And if the priest see that, behold, the scab spreadeth in the skin, then the priest shall pronounce him unclean: it is a leprosy.

Leviticus 14:55 KJV
And for the leprosy of a garment, and of a house,

Leviticus 14:2 KJV
This shall be the law of the leper in the day of his cleansing: He shall be brought unto the priest:

Mark 14:3 KJV
And being in Bethany in the house of Simon the leper, as he sat at meat, there came a woman having an alabaster box of ointment of spikenard very precious; and she brake the box, and poured it on his head.

2 Chronicles 26:21 KJV
And Uzziah the king was a leper unto the day of his death, and dwelt in a several house, being a leper; for he was cut off from the house of the LORD: and Jotham his son was over the king’s house, judging the people of the land.

Leviticus 22:4 KJV
What man soever of the seed of Aaron is a leper, or hath a running issue; he shall not eat of the holy things, until he be clean. And whoso toucheth any thing that is unclean by the dead, or a man whose seed goeth from him;

2 Kings 5:1 KJV
Now Naaman, captain of the host of the king of Syria, was a great man with his master, and honourable, because by him the LORD had given deliverance unto Syria: he was also a mighty man in valour, but he was a leper.

2 Kings 5:11 KJV
But Naaman was wroth, and went away, and said, Behold, I thought, He will surely come out to me, and stand, and call on the name of the LORD his God, and strike his hand over the place, and recover the leper.

Leviticus 13:45 KJV
And the leper in whom the plague is, his clothes shall be rent, and his head bare, and he shall put a covering upon his upper lip, and shall cry, Unclean, unclean.

2 Kings 15:5 KJV
And the LORD smote the king, so that he was a leper unto the day of his death, and dwelt in a several house. And Jotham the king’s son was over the house, judging the people of the land.

2 Chronicles 26:23 KJV
So Uzziah slept with his fathers, and they buried him with his fathers in the field of the burial which belonged to the kings; for they said, He is a leper: and Jotham his son reigned in his stead.

2 Samuel 3:29 KJV
Let it rest on the head of Joab, and on all his father’s house; and let there not fail from the house of Joab one that hath an issue, or that is a leper, or that leaneth on a staff, or that falleth on the sword, or that lacketh bread.

Leviticus 13:12 KJV
And if a leprosy break out abroad in the skin, and the leprosy cover all the skin of him that hath the plague from his head even to his foot, wheresoever the priest looketh;

Leviticus 13:25 KJV
Then the priest shall look upon it: and, behold, if the hair in the bright spot be turned white, and it be in sight deeper than the skin; it is a leprosy broken out of the burning: wherefore the priest shall pronounce him unclean: it is the plague of leprosy.

Leviticus 13:59 KJV
This is the law of the plague of leprosy in a garment of woollen or linen, either in the warp, or woof, or any thing of skins, to pronounce it clean, or to pronounce it unclean.

2 Kings 5:27 KJV
The leprosy therefore of Naaman shall cleave unto thee, and unto thy seed for ever. And he went out from his presence a leper as white as snow.

Leviticus 13:52 KJV
He shall therefore burn that garment, whether warp or woof, in woollen or in linen, or any thing of skin, wherein the plague is: for it is a fretting leprosy; it shall be burnt in the fire.

Luke 5:12 KJV
And it came to pass, when he was in a certain city, behold a man full of leprosy: who seeing Jesus fell on his face, and besought him, saying, Lord, if thou wilt, thou canst make me clean.

Leviticus 14:34 KJV
When ye be come into the land of Canaan, which I give to you for a possession, and I put the plague of leprosy in a house of the land of your possession;

2 Kings 5:6 KJV
And he brought the letter to the king of Israel, saying, Now when this letter is come unto thee, behold, I have therewith sent Naaman my servant to thee, that thou mayest recover him of his leprosy.

Deuteronomy 24:8 KJV
Take heed in the plague of leprosy, that thou observe diligently, and do according to all that the priests the Levites shall teach you: as I commanded them, so ye shall observe to do.

Leviticus 13:43 KJV
Then the priest shall look upon it: and, behold, if the rising of the sore be white reddish in his bald head, or in his bald forehead, as the leprosy appeareth in the skin of the flesh;

Leviticus 13:20 KJV
And if, when the priest seeth it, behold, it be in sight lower than the skin, and the hair thereof be turned white; the priest shall pronounce him unclean: it is a plague of leprosy broken out of the boil.

Leviticus 13:13 KJV
Then the priest shall consider: and, behold, if the leprosy have covered all his flesh, he shall pronounce him clean that hath the plague: it is all turned white: he is clean.

Leviticus 13:11 KJV
It is an old leprosy in the skin of his flesh, and the priest shall pronounce him unclean, and shall not shut him up: for he is unclean.

Leviticus 13:51 KJV
And he shall look on the plague on the seventh day: if the plague be spread in the garment, either in the warp, or in the woof, or in a skin, or in any work that is made of skin; the plague is a fretting leprosy; it is unclean.

Leviticus 13:49 KJV
And if the plague be greenish or reddish in the garment, or in the skin, either in the warp, or in the woof, or in any thing of skin; it is a plague of leprosy, and shall be shewed unto the priest:

Leviticus 14:7 KJV
And he shall sprinkle upon him that is to be cleansed from the leprosy seven times, and shall pronounce him clean, and shall let the living bird loose into the open field.

Leviticus 13:27 KJV
And the priest shall look upon him the seventh day: and if it be spread much abroad in the skin, then the priest shall pronounce him unclean: it is the plague of leprosy.

Leviticus 13:30 KJV
Then the priest shall see the plague: and, behold, if it be in sight deeper than the skin; and there be in it a yellow thin hair; then the priest shall pronounce him unclean: it is a dry scall, even a leprosy upon the head or beard.

2 Kings 5:7 KJV
And it came to pass, when the king of Israel had read the letter, that he rent his clothes, and said, Am I God, to kill and to make alive, that this man doth send unto me to recover a man of his leprosy? wherefore consider, I pray you, and see how he seeketh a quarrel against me.

2 Chronicles 26:19 KJV
Then Uzziah was wroth, and had a censer in his hand to burn incense: and while he was wroth with the priests, the leprosy even rose up in his forehead before the priests in the house of the LORD, from beside the incense altar.